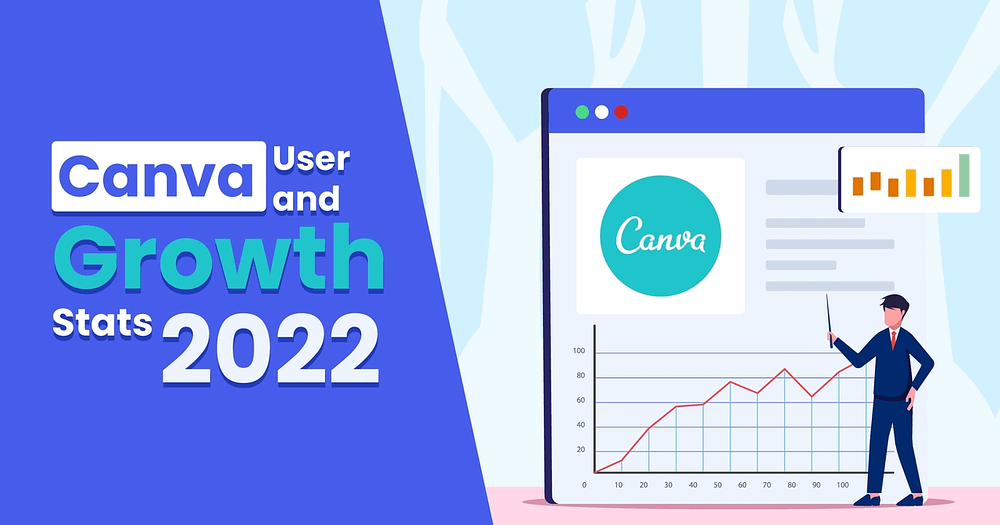 Canva is an Australian design and publishing tool created by Melanie Perkins, who was just 19 years old when she founded the company in 2013. Canva has grown into a globally recognized brand, with over 100 million users spanning 190 countries.

Now valued at over $40 billion (as of 2022) the company is generally viewed as one of Australia's most successful startups of all time.

It's a fascinating enterprise with an inspiring backstory. We thought it might be interesting, from the perspective of a startup founder, to run through various stats about this incredible company. Let's take a look.

According to Canva, in the month of October 2022, there were about 100 million active users.

This was a significant increase from March 2022, where about 75 million users were estimated. Whereas Canva Pro has 5 million subscribers as of October 2022.

In September 2022, more than 27 million teachers and students used this tool monthly.

Canva is actively being used in 190 countries. With such rapid success, this company became number 10 on the World’s Most Innovative Companies list while being number 1 in the Design category for 2022.

Almost a decade ago, Canva stepped into the designing world, and within three years, the platform managed to get 4 million users.

Number of Projects Made on Canva

Not only that, by the end of 2021, approximately 227 million presentations and more than 1 billion videos were made.

Top Industries That Use Canva

Looking at the Canva users by industry, it was found that Higher Education is on top with a 15% share, followed by Nonprofit Organization Management at 7%, Marketing and Advertising at 6%, and Information Technology and Services at 5% are the largest segments.

Canva has an extensive library of over 400,000+ templates that include presentations, videos, emails, and social designs, fully optimized for different platforms.

This tool offers about 5,973 free and 5,010 pro templates that users can utilize to make their presentations. But if you're interested in sending a professional newsletter, it has got you covered with its 1,589 free and 1,889 paid templates.

The Most Used Feature

The most widely used feature of this tool is its free templates. Access to thousands of free templates and images makes the user's work easier and helps them avoid starting a project from scratch.

Almost 35% of Canva users are 25-34 years old. In fact, 60% of the users are under 34, but this platform is also gaining popularity among older users.

In 2016, Canva launched its first-ever mobile app, and with that, the designing tool also got popular among mobile users; so popular that Canva reported that 60% of traffic has been coming from mobile phones in recent years.

While some people still prefer using Canva's web or desktop versions for designing, many use its mobile app due to its easy accessibility.

Globally, 942 companies use Canva for Office Productivity, giving it a share of 0.01%.

Canva has a total of 42523 customers in the presentation market, giving it a global market share of 28.92%.

In 2022, 28120 companies started using Canva as a representation tool, with Apple being at the top, followed by TCS and Filipina.

The three top industries that use Canva for Presentation are Marketing, with 1367 customers; Education, with 1302 customers; and Social Media has 1030 customers.

The tool is available for Windows, Mac, iOS, and Android platforms and has a total of 4 apps, 2 for Android and 2 for iOS.

In the last three months, the total mobile app downloads for Canva was 11 million, with 3 million on iOS and 8 million on Android.

How Does Canva Make Money?

This tool has a free and two subscription plans. The free version gives you access to Canva's most basic features and 250,000+ free templates.

The Pro version has two subscription plans; one for individuals and one for teams. The individual plan costs $6.99 per month or $54.99 per year for one person only.

The default price is available for up to five people. So if you have a team of more than five people, the price will increase for every new member.

If you want to use this tool for educational purposes, you first need to verify your designation by contacting Canva support.

Canva is 100% free for teachers and students of K-12 (primary and secondary) educators. You’ll get all Canva for Teams features in education plans.

According to Crunchbase, Canva is funded by 35 investors that helped raise a total of $572.6M over 14 rounds.

Their most recent investors are T. Rowe Price and Franklin Templeton Investments.

How Much Is Canva Worth?

On Feb 28, 2022, the company made an investment of $4.2M in Calven. Since its release, Canva has acquired six organizations, including their most recent acquisition, Flourish, on Feb 2, 2022.

Figma might eventually become a competitor to Canva, being one of the most active online designing apps offering an easy-to-use web interface.

In comparison with Canva, it lacks templates and versatility, and its app is not as good as Canva since it only allows sharing, moving, and checking on designs. You can’t create any design using the Figma app.

Piktochart is another visual and video maker platform trusted by more than 11 million users, making it a potential competitor for Canva.

Adobe Express, with its royalty-free stock photo and font collection and thousands of gorgeous templates, can give Canva tough competition.

Not to mention people using Adobe products are bigger in numbers than Canva.

With an easy-to-use online photo designing and editing interface featuring thousands of templates, and a broad user base, PicMonkey has the potential to become a promising competitor to Canva.

Visme is also easy to use, but it's not quite as intuitive as Canva. While it can give competition to Canva in terms of presentations, infographics, designs, and videos, Canva is still relatively easier to use.

According to their website, more than 170 million people are using Visme in 133 countries, helping this platform to reach $2.1 million in 2022.

Canva is the first Australian company to sign The Climate Pledge, joining the commitment to reach net-zero carbon by 2040. They are trying to make their print operations carbon-neutral by the end of 2022 to become climate positive by 2023.

Canva has grown exceptionally, especially after 2020, with the pandemic forcing people to explore new apps and tools that better suit a home-working environment. Despite things returning to normal, Canva’s popularity is still increasing. If you’ve been hesitant to try it out, let these canva user and growth stats give you a much-needed push.