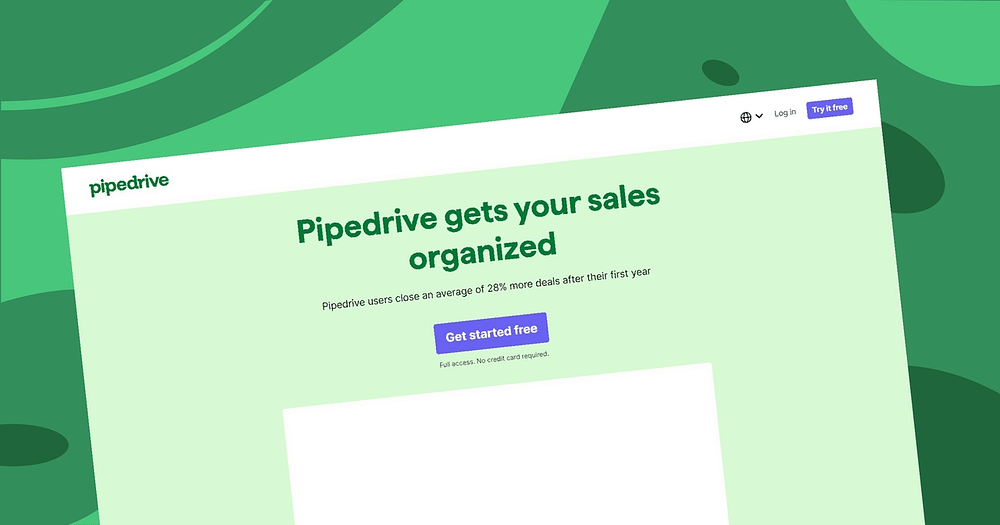 With slow but very careful growth since its launch in 2010, Pipedrive is beginning to make a name for itself over the last few years as a pretty credible CRM.

With its tagline: ‘Designed to keep you selling’, this Customer Relationship Management (CRM) tool looks appealing and promising to sales professionals and Founders.

Catching the eye of 13 investors and not showing any signs of slowing down in terms of popularity in near future, Pipedrive can become one of the most popular CRM of all time.

Let’s dive into its stats, see how this company started, and learn more about it.

12 years after its release, more than 100,000 individuals and businesses use Pipedrive to improve their relationship with customers.

Prior to launching Pipedrive, the co-founder Timo Rein was selling books door-to-door, before teaming up with two other professionals and creating a new and rather exciting company.

Upon realizing that they needed a smarter way to reach clients so they don’t have to call the same company twice, they purchased a CRM.

Born out of a concern for the flawed strategies of various CRMs they had worked with or consulted for over a decade, they decided to create their own CRM cemented by their combined experience, insights, and vision.

By using social listening as their marketing strategy and continuously updating and improving their CRM, between 2014 to 2017 Pipedrive saw exceptional growth reaching over 50,000 paying customers by the end of 2017.

In 2020, Digital.com added Pipedrive to its list of best customer relationship management software, as this platform reached 90,000 companies worldwide.

4. Top Industries that use Pipedrive

Information Technology and Services are on the top with 14%, followed by Computer Software at 11%, Marketing and Advertising at 8%, and Internet at 5%. The rest 62% belong to other sectors.

In August, the Pipedrive website had 11.1 million visitors, which reduced to 10.1 million in September, continuing the trend as it reached 9.6 million in October with a bounce rate of 24.88%.

The company has more than 1,000 employees all across the world, but most of them are based in Tallinn, Estonia.

According to SimilarWeb, close to 60% of Pipedrive’s users are between 25-44 years old.

According to Enlyft, with the data on 11,035 companies using Pipedrive, this platform has a global market share of 2.42%.

With the option to create a pipeline that best suits your business, over 1 million pipelines have been created using this tool.

Pipedrive has closed 70 million of the 200 million deals added to the platform.

Pipedrive has recorded over 15 million leads and 15 million calls logged, with half a million zoom calls scheduled over this platform.

A total of over 1 million products have been added to Pipedrive, stemming from the huge volume of customers using the platform.

According to Pipedrive, it has been recorded that in 2022 companies or individuals have secured deals every 2 seconds.

According to Crunchbase, Pipedrive has raised a total of $90.2 million in funding from Seed State to Series C. Their last funding was raised in November, 2020, from Vista Equity Partners.

16. Most Active Investors In Pipedrive

A certain world-famous basketball star, Shaquille O'Neal, is an early investor in Pipeline and has previously released video content showing his support for the company.

17. How Much Is Pipedrive Worth?

According to tech.eu, Pipedrive was valued at $1.5 billion in November 2020, following a major investment from Vista Equity Partners, which become the controlling shareholder.

While we expect this valuation has increased, current figures are vague. Either way, this is a growing company with a bright future.

18. How Pipedrive Helped Its Customers - Stats

According to Pipedrive, their tool helped more than 71% of companies to grow in 2021 compared to 2020, while 73% said that they exceeded their revenue goals.

With Pipedrive automated sales and marketing feature, their customers were more likely to hit 16% more of their sales target while exceeding their forecasted sales by 24%.

PipeDrive started a Summer School of Code, offering internship and mentoring programs for people with little to no experience in the tech industry.

This program provides an efficient and focused learning environment, giving an opportunity to gain practical experience by participating in teamwork, collaboration, and solving problems that are close to real work experience.

The Sales Hub helps expand your brand while reducing stress by handling day-to-day duties allowing you to focus on more essential things.

In addition, its user-friendly GUI allows the staff to do their job effortlessly and enjoy their work in the process. Until now, HubSpot has about 158000 customers, but the number continues to grow significantly each day.

Salesforce is an extremely versatile CRM that showed tremendous growth and quickly became an ecosystem serving over 150000 customers. With this tool, you can combine data to create analytics within different objects.

Salesforce makes it easy to send contracts to your client and view their information in one go. You can also manage all the data efficiently, track the company's growth and sales, and save time with the help of reports generated within the same platform.

Insightly is an easy-to-use customer relationship management (CRM) system that's mainly focused on helping small to midsize businesses. With its easy interface, getting data into the system isn't overly convoluted.

Though it doesn’t have as many features as some other CRMs, many of its positive reviews make it a worthy competitor of Pipedrive.

Aside from offering core CRM features (contact and lead management), Insightly also works well with other apps, making it famous among 1.5 million people.

Zoho CRM is one of the best mobile CRM because of its affordability, elegant and intuitive design and a wide range of useful features.

While its comprehensive desktop version has many essential CRM features, the real power lies in its mobile app, which truly makes this CRM unique and a worthy competitor of Pipedrive.

You can do almost all tasks on it, from checking to updating records to accelerating sales with the help of AI.

Zoho’s CRM software makes it easy to nurture customer relationships from anywhere as the mobile app feeds data to all team members effortlessly, helping collaboration on the go.

More than 250,000 businesses across 180 countries trust this award-winning platform.

Microsoft Dynamics 365 is an excellent solution for all growing businesses as a CRM and ERP. Especially those looking forward to increasing growth by building and maintaining strong customer relationships.

One of many reasons why more than 4.4 million users already love this tool.

Pipedrive is an ideal CRM for small-to-medium-sized businesses, helping them easily manage their contacts, leads and deals.

Despite not offering a free plan, this tool has reasonable prices and is easy to use, making it a great option for people with less experience using CRM tools.

Hopefully, the stats and general overview provided will give you a better grasp of Pipedream and determine if it is a good fit for your business.